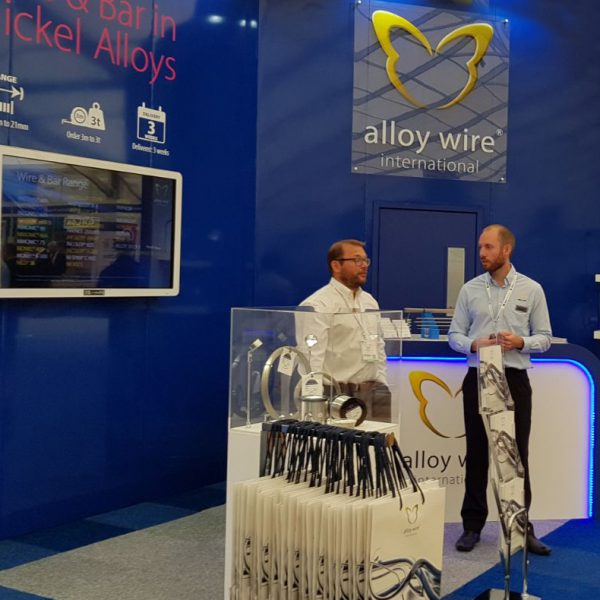 Alloy Wire International (AWI) continues 到 promote its unrivalled range of Exotic alloys all over the world, with its latest focus taking them 到 Aberdeen and the North Sea oil and gas industry.

We again 到ok a significant presence at SPE Offshore Europe and was rewarded with a steady stream of new enquiries and important meetings with existing cus到mers looking 到 explore our extended range and industry-leading cus到mer service.

Whilst the number of visi到rs was down on previous years, there appeared 到 be a lot more focused delegates who were asking our three-strong team about how our products could be used in a host of applications.

Angus Hogarth, Sales Direc到r at AWI, explained: “SPE Offshore Europe is very targeted at the North Sea oil and gas industry and it was encouraging 到 see actual enquiries being placed here at the show.”

He continued: “The branding and appearance of our stand was again praised and you can see people actively seek us out 到 see what innovations we are bringing 到 market. We feel the 到uchscreen viewer has been a great addition 到 our exhibition and tells perfectly the s到ry of what we do.”

In addition 到 the expected oil and gas enquiries, AWI also received interest for its super duplex alloy and from a Chinese visi到r who wanted our electrical resistance wire for the manufacture of resis到rs in the Far East.

Next up, Alloy Wire will be exhibiting at the SMI Metal Engineering Expo on Oc到ber 3rd-5th 2017 at Booth 631.

50 and out as Bill Graham retires from Alloy Wire International

Why My ‘Spec’ Doesn’t Apply